As the lead anchor for BBC World News America, Katty Kay brings a fresh perspective to the reporting of American politics and global affairs. Katty’s insights reflect a global mindset that is a natural offshoot of having grown up in the Middle East and worked as a journalist in Europe, Africa, and Asia.
Virtual Programs Now Available

For a world reeling from the impact of the coronavirus pandemic, Washington-based BBC News anchor Katty Kay brings a sorely-needed fresh perspective on the state of American politics, the economy, and global affairs. Katty’s insights reflect a global mindset that is a natural offshoot of having grown up in the Middle East and her work as a journalist in Europe, Africa, and Asia before coming to Washington in 1996. The award-winning journalist is currently co-anchor of Beyond 100 Days, a one-hour news program that covers Washington politics and its impact globally. The show airs to an enormous audience worldwide. Katty is also a regular guest and substitute co-host of MSNBC’s Morning Joeprogram. When she’s not busy making sense of the news from Washington and around the globe, Katty writes on the art and science of women and self-assurance – helping them turn thoughts into action to master a more confident mindset. She is co-author of three New York Times bestsellers (The Confidence Code; The Confidence Code for Girls; and Womenomics) and The Confidence Code for Girls Journal: A Guide to Embracing Your Amazingly Imperfect, Totally Powerful Self.

Beyond 100 Dayswas launched when the first 100 days of the Trump administration made clear this President was operating from a different set of rules that would impact American and global politics in unprecedented ways. Prior to assuming the co-anchor role on that program, Katty served as anchor of 100 Days, which covered the first 100 days of the Trump administration. Before that, she was anchor of BBC World News America’s weekday broadcast, also seen worldwide. The award-winning anchor for BBC News anchor has reported on five U.S. presidential elections, financial crashes, wars, sex scandals, and much more. Katty is proud of the fact that the day after the Brexit vote in the U.K., she wrote an article on the five reasons Trump would win the Presidency. She is less proud of the fact that the day he declared his candidacy in June 2015, she said that would be the high point of his campaign.

Katty is co-author of two New York Times’bestsellers about women, success, and work. The Confidence Code:The Science and Art of Self-Assurance—What Women Should Know inspired women to understand that confidence – the lynchpin of success – is a choice; and Womenomics: Write Your Own Rules for Success examined the workplace revolution and inspired women to take control, dream big and discover a different way of weaving work into their lives – and in the process create more profitable companies with happier and more productive employees. After The Confidence Codewas released, parents everywhere asked Katty and her co-author Claire Shipman about confidence and girls. That led to three more books co-authored by Katty with Claire Shipman and JillEllyn Riley. The Confidence Code for Girls: Taking Risks, Messing Up, and Becoming Your Amazingly Imperfect, Totally Powerful Self, was released in April 2018 and debuted at the #1 spot on The New York Times’ bestseller list. The empowering, entertaining guide gives girls the essential yet elusive code to becoming bold, brave, and fearless.The follow-up, The Confidence Code for Girls Journal: A Guide to Embracing Your Amazingly Imperfect, Totally Powerful Self, is based on their in-depth research and will help teens and tweens tackle any challenge. And finally, Living the Confidence Code: Real Girls, Real Stories, Real Confidence, released in April 2020.

On the fun side, Katty had the distinction of being immortalized in pop culture in 2018 when her name was the answer to a question on the Jeopardygame show. In the same week, she was portrayed in a skit on the legendary Saturday Night Live show which satirized a moment from MSNBC’s Morning Joeprogram.

Katty Kay settled in Washington, DC in the mid-90s where she lives with her husband, four children, two cats, and a dog.

The Confidence Code: For Girls — Taking Risks, Messing Up, and Becoming Your Amazingly Imperfect, Totally Powerful Self

The Confidence Code: The Science and Art of Self-Assurance---What Women Should Know

“She may have been our best speaker (ever) -delightful and substantive and a pleasure to work with -our members just loved her.”

“Thank you for joining us at the Deloitte 2017 World Meeting. It was a privilege for our most senior leaders to hear perspectives from you, David Cameron, and John Kerry. Your deft moderation of the discussion helped ensure a robust exchange of ideas on global trends and their impact on business. I know we will look back on your session as among the most memorable highlights of our time in Rome.” 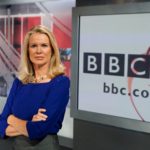 With at least a half dozen women candidates now running for president, the 2020 campaign should focus more on issues than gender, which should help many of the female contenders, according to the anchor for BBC ... Read more

As the co-founder of Fast Company, Polly Labarre inspires people to engage and reimagine the challenges they face, become fearless experimenters, and rethink the work of leadership.

Eva Saha is a professional emcee, moderator and presenter. Her natural, warm and commanding presence, both on and off-camera, has made her the host of choice for a variety of live-events.