Diane Guerrero was just 14 when her parents were detained and deported. Born in the U.S., she was able to remain in the country and continue her education, depending on the kindness of family friends who took her in and helped her build a life and a successful acting career. She recounts her story in her memoir, “In The Country We Love,” a moving, heartbreaking story of one woman’s extraordinary resilience in the face of the nightmarish struggles of undocumented residents in this country.

Diane has, from an early age, had an affinity for the arts. After graduating high school, she received a degree in political science and communication; however, she quickly realized her passion lay in performance art, and moved to New York to pursue her dreams. Diane subsequently appeared on numerous television series and is best known for her roles as “Maritza Ramos” on the Emmy- and Golden Globe-nominated Netflix series “Orange Is The New Black” (for which she received three Screen Actors Guild awards) and as Lina in CW’s break-out hit, “Jane The Virgin.” She recently wrapped a co-lead in the Sony/CBS pilot “Distefano,” from the creators of “How I Met Your Mother.”

In 2015, Diane was nominated by President Obama to be a White House Ambassador for Citizenship and Naturalization. She is an outspoken advocate for common sense, comprehensive immigration reform and has worked with Immigrant Legal Resource Center and Mi Familia Vota, a nonpartisan Latino civic engagement organization to promote citizenship and voter registration.

In the Country We Love

She was very impactful. Tears were shed. Many students were so thankful that we stepped out of our comfort zone and didn't just plan a party but planned an event with such purpose. She was amazing with the students - no one was left without a selfie or a chance to chat with her. She really took the time to chat with students who had been so moved by her. She is much much more than 'someone from OITNB and Jane the Virgin'!

It was a huge success. The students were star struck and very impressed with how relatable she was. There were some huge emotions in the room due to the elections, however she was able to break through and connect with the audience. Loved having her! 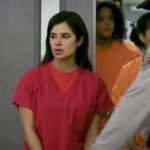 ‘Orange Is the New Black’ highlighted an immigrant hotline. Then ICE shut it down.

In the seventh season of Netflix’s “Orange Is the New Black,” the fictional character, played by Diane Guerrero, had an immigration hearing … 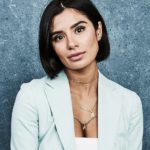 Growing up, Diane Guerrero was terrified of arriving home to an empty house. From a young age, she knew that might mean that her parents and brother—none of whom were U.S. citizens, though Guerrero is one—had been ... Read more

Jordyn discusses her journey and elevates messages of body positivity, empowerment, and how she remains authentic in the media spotlight.
Now Available for Virtual Programming